What is a Serious Case Review (SCR)?

A Serious Case Review (SCR), is undertaken by the Safeguarding Children Board when;

Professionals from a wide range of agencies working with a child and family contribute their experiences and perspectives in an effort to; learn and explore what could have been done differently to improve the outcomes for the child and to provide future guidance for professional practice.

This SCR was undertaken on a female who we shall call Eleanor, to respect her anonymity. The SCR was initiated following a referral, for a SCR, to the SCR Sub-group Panel.

In the case of Eleanor all agencies were required to provide Independent Management Reviews (IMRs) and a chronology of their involvement with Eleanor. In addition, a practitioner’s event took place which explored key episodes and events within the timeframe being reviewed by the SCR enabling professionals to talk through their experiences in a safe and learning environment.

Changes since the SCR for Eleanor

It is fair to say that the issues of record keeping, translation and communicating with customers, for whom English is not their first language, have all been addressed by the District Council since this review started.

The Serious Case Review for Eleanor

When Eleanor was 19 months old she was the subject of a serious assault perpetrated by her natural father, when he struck her in the face several times causing serious injuries. Subsequent medical examination revealed that Eleanor had suffered a series of significant and serious historical injuries. Whether by design or due to their own circumstances the family seemed to have lived ‘off the radar’.

Both Eleanor and her sibling, then aged 2 years and 6 months were taken into protective care and subsequently made subject of care proceedings. Both her mother and father are currently serving a custodial sentence.

Both mother and father were not English speakers and had only been in the UK since 2014, these factors would undoubtedly present a challenge for them to fully integrate and avail themselves of services. The potential for these barriers were recognised by professionals at an early stage.

Eleanor and her sibling were born in Hospital a year apart. Mother and father were seen by professionals as being unwilling to engage with universal services at the outset of Eleanor and her sibling’s births. Father did attend a local service and spoke with an Eastern European member of staff stating that he was in rent arrears and likely to be made homeless. At this time the family were living in private rented accommodation where the arrears had accrued. The letters sent to parents in relation to Housing were in English. These involved important issues for the family and were not likely to have been understood. It is not clear what support in relation to housing the family were given. The fact that there were looming court proceedings in relation to rent arrears is likely to be another reason why mother and father were reticent to engage with agencies.

When mother failed to attend a Health visitor appointment, the Health visitor contacted the midwife and was informed that mother had attended a clinic a few days earlier and had been advised to see her Doctor as Eleanor had a rash in her groin. Mother had stormed out of the clinic. The midwives had been concerned and had tried to visit the family over the weekend but received no reply. They had also left phone messages using an interpreting service. It was agreed by the health visitor and midwife that the police would be asked to undertake a safe and well visit.

There is evidence throughout this relatively short case of professionals working really well together, appropriately sharing information in most instances, and some doing more than may have been expected of them.

Mother contacted relatives on social media and made a number of allegations against her father being violent towards mother. The action by the police at the address was thorough and followed up with a safeguarding referral, however no DASH (domestic abuse, stalking and ‘honour’-based violence) risk assessment was undertaken. The assessment may have led to the initiation of other services such as an IDVA (Independent Domestic Violence Advisor) and a wider recognition of the presence of potential domestic abuse in the relationship. It may also have impacted on threshold decisions for safeguarding and support made by other agencies. The police after this visit did highlight that the premises, (converted office space), in which the family were living were not suitable surroundings for young children.

In September 2017, Suffolk Police were contacted by Eleanor’s paternal grandfather with serious concerns for Eleanor.

It is during the period of absence from agencies that the expert medical evidence would suggest that the significant harm was caused to Eleanor. The fact that Eleanor’s injuries were so serious meant that contact with any service, particularly health would have led to discovery of the injuries. It is likely that during this period of time, that the mother and father deliberately evaded the attention of all services.

Distrust, or perhaps lack of understanding of the cultural differences, can be seen in this case. When mother disclosed domestic abuse, it was after the assault on Eleanor and during assessment by Children Services. When asked why she had not sought help previously she stated that she believed that this would immediately put her children at risk of being taken by the authorities. Agencies in the main were positive, working together, using interpreters and translated letters. However one particular agency sent letters in English which the family would not have understood. Agencies need to be mindful of cultural competence when working with families who have moved from oversees.

Agencies need to be mindful of risk factors and aware of the potential impact of these on children in the family, when working with parents who have mental ill health, domestic abuse and substance misuse.
Since the assault has come to light, mother has disclosed that there was regular domestic abuse perpetrated on her by father. This took the form of physical assault and behaviour to control her such as monitoring her social media accounts, and is said to have started during the pregnancy with Eleanor. This abuse is denied by father. It is likely that some of the abuse was witnessed by the sibling.

Also post the assault on Eleanor, father has disclosed a history of his own mental ill health. The extent of this is not known. Father also disclosed that for one year prior to the assault he was using cannabis on a daily basis.

This was a family that moved a number of times some of the accommodation was completely unsuitable for a family to live in (for instance, converted office space). The time when they sought support was when they were about to be homeless or in significant rent arrears and unfortunately the severity of their circumstances was missed.

A workshop took place with all of the agencies involved with Eleanor and her family and the following points were discussed and put forward as areas to focus on for future learning to help prevent a case like this happening again: 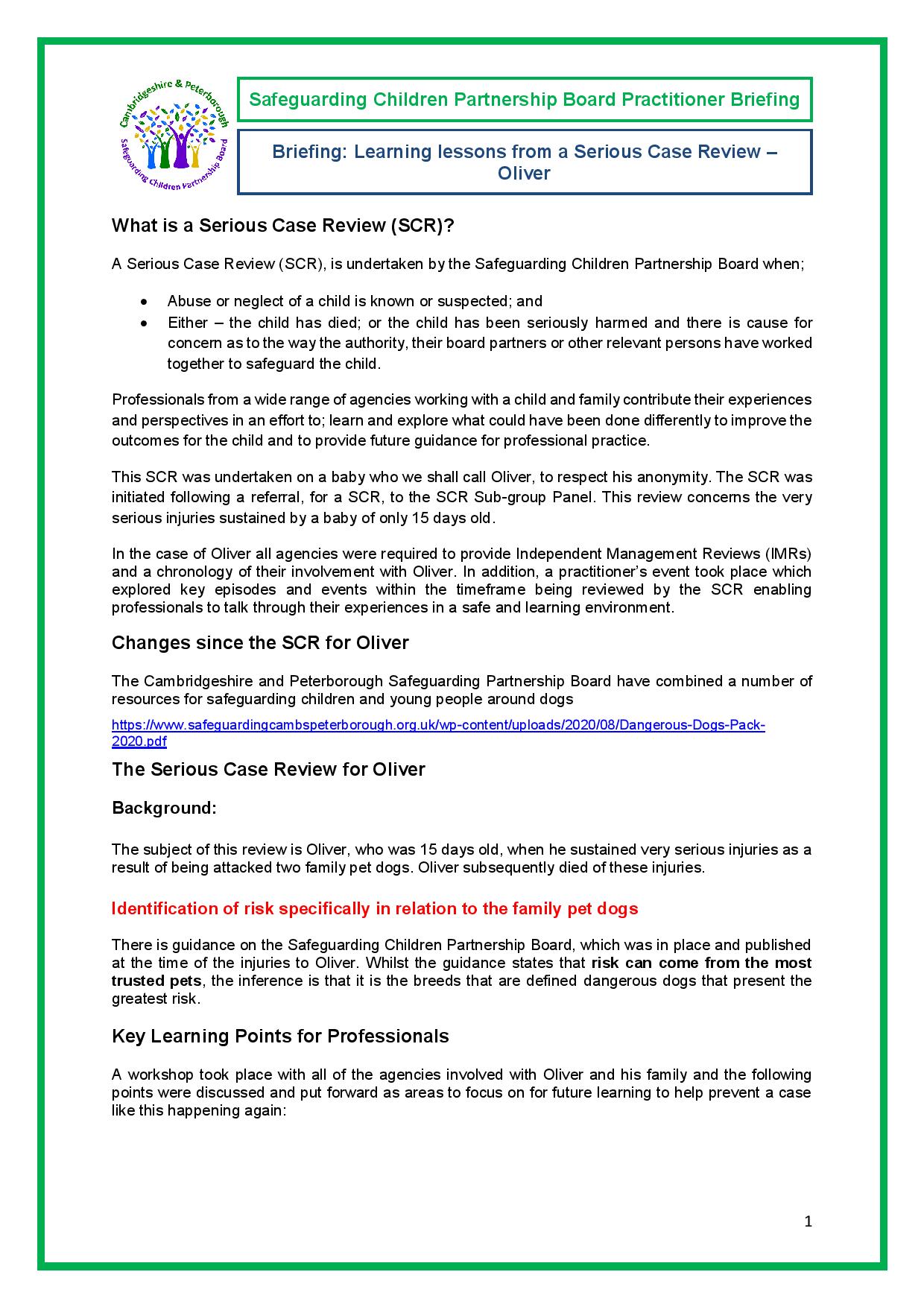 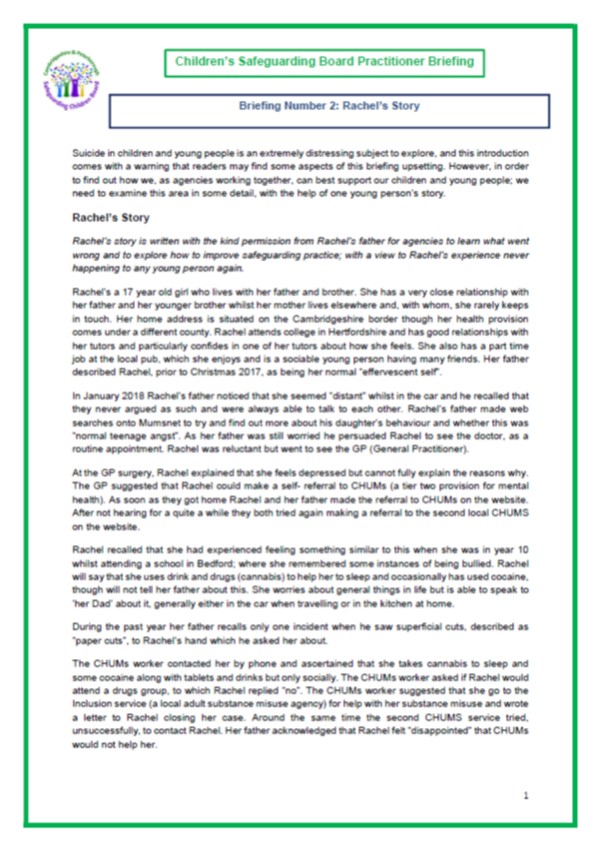 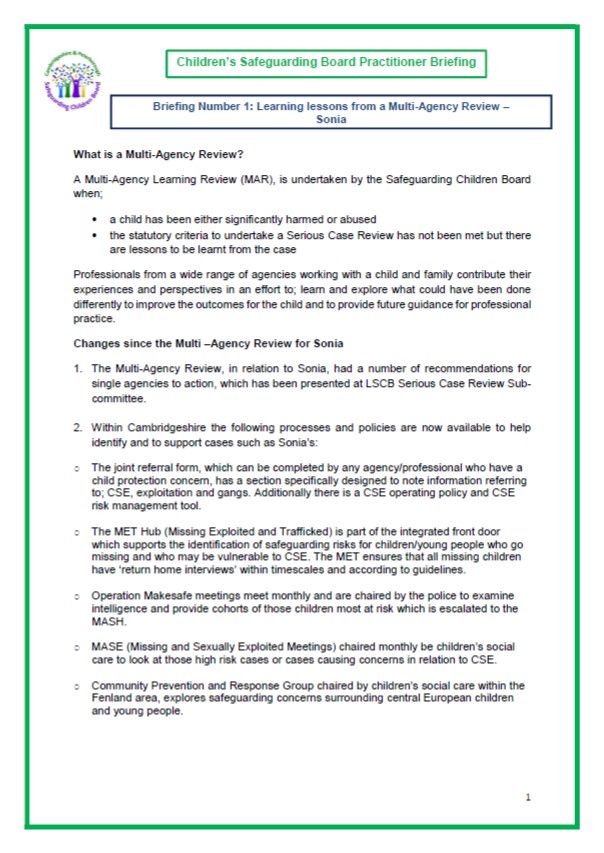 What is a Multi-Agency Review? A Multi-Agency Learning Review (MAR), is undertaken by the Safeguarding Children Board when; a child…